Late last summer I embarked on a long day trip for the purpose of enjoying the country and making a few finds along the way. One stop took me to a Midwest coin shop that I had not visited before. Among the large type in the currency inventory I spotted a 1914 $10 Federal Reserve Note from the St. Louis district (Fr. 932) that had an odd look to it. A minute of comparison between it and other like notes revealed that the font set for the serial numbers was noticeably different – the most distinctive difference being that that odd note exhibited a “droopy 2” compared to the otherwise normal notes. I purchased the note along with other planned acquisitions, and thought about what it could mean on the way home. My note has a low seven digit serial number.

Still fresh in my mind was the magnificent talk by James Simek and Peter Huntoon at the Higgins Conference in August about replacement notes for 1929 National Bank Notes. I had earlier run into Jim at the Memphis show in June, where he showed me first hand some of the classic examples of these from his collection. To see his presentation really tied everything together nicely. Whenever I look through a stack of small nationals, I now make an effort to detect replacement notes.

I took this practice one step further, with the 1914 note. It’s not a national, but the serial number is clearly different. I came to a few possible explanations. 1) The note was a contemporary counterfeit, 2) the BEP needed to use additional numbering equipment to handle the volume of notes needed at the time, and resorted to numbering presses from earlier types of notes, or 3) it was non-star replacement or make-up note.

After a careful study of the suspect note with others, I came to the easy conclusion that it is indeed genuine. There is nothing un-BEP about it, period.

The serial number fonts, however, do match those made for the early regular production black eagles, and even some notes dating back to the 1880s. As best I can tell, the font set was retired sometime before 1910. The most distinctive numbers in the set are the “2”, with its upper stroke descending to the midline, compared to the normal contemporary font. The base of the “4” is also especially low. Other minor differences are observed.

To test the second hypothesis, I searched through hundreds of records on Heritage Archives (www.ha.com) and elsewhere to find images of notes in a similar serial number run as mine. I found both notes with higher and lower numbers, although none with very close gaps. I could find no other notes with this class of serials. I expanded the search to include all 1914 FRNs with the Burke-McAdoo signature combination. I finally found some, all low numbered examples, including a $100 star note! I now had recorded four notes with the special serial number font.

I also watched eBay for such notes, and came up with one hit over a period of several months. It is also from the St. Louis district, with a seven digit number. Unfortunately, I carelessly let that note escape me. The eBay example is pictured here.

Then, with the release of Paper Money #278, Jim Simek and Peter Huntoon come to the rescue with their article on Series 1929 National Bank Replacement Notes. The very last page (108) of the article hit me between the eyes, with their brief discussion that 1-, 2- and 3- digit serial numbers on large type notes were applied using paging machines, the same technique used for small size non-star replacements. This is certainly consistent with what my research had found, but still did not explain my 1914 example.

The discovery of my seven digit 1914 FRN expands the discussion to include the possibility or likelihood that paging machines were used to create replacement notes with serials exactly replacing the damaged notes. By this time (post-1910), star notes were normally used to replace defective notes. What remains unclear is why this standard practice was apparently not used in at least this one case. 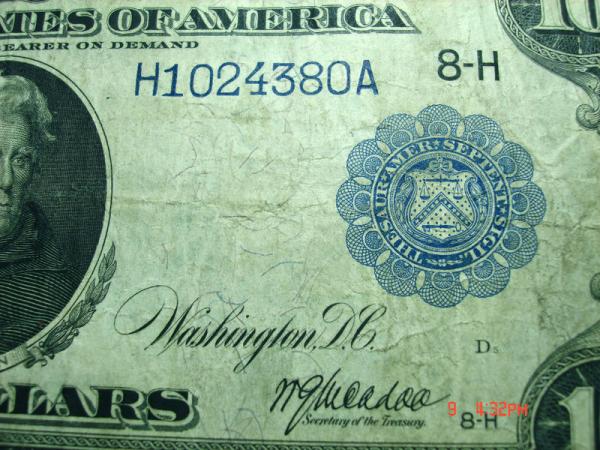