I always like going to Memphis as it remains the largest gathering of paper money aficionados anywhere. The 2012 International Paper Money Show was no exception albeit with somewhat subdued numbers of people this year. I’m not quite sure why, but perhaps it was the escalating airfare or perhaps the entrance to the show fees of $7 / day or $20 / show. Certainly the latter kept casual people out that might be beginners – they may not spend a lot of money, but I and some dealers do carry $10, $15 and $20 stuff in addition to the four and five figure material.

My wife Joyce and I flew for the first time in several years as we now live in the Boston, MA area, arriving on Wednesday evening. We immediately ran into Roger Adamek, new Commander of the Trainmen and had a nice discussion about many different things.  Saw Stephen Goldsmith of Spink as well as numerous other paper money collectors and dealers (including Randy Shipley, Richie Self, Amanda Sheheen, Crutch Williams, and Hugh Shull for the first time in a while). Joyce and I went down to Beale Street, the entertainment district, where a motorcycle show of sorts was going on and it was very crowded. We enjoyed one of several rounds of great Tennessee BBQ that night and other nights along with some shopping and sightseeing. It turned out that day, June 6, was the 150thanniversary of the Battle of Memphis, a Union victory, and we walked the river walk which overlooked the site of the battle on the Mississippi River.  The weather was spectacular, best I recall, perfect temperature and blue skies.

Thursday was auction lot viewing and set up.  I viewed the Confederate lots and placed some bids.  Then we went to the bourse floor to setup. I got Joyce rolling at the table and then went to set up my exhibit – the only T-41 variety set ever assembled including all of the J Whatman varieties, the rare PF-2 and PF-24s, and four Wookey Hole Mill varieties including the finest known PF-4. I was very lucky and diligent over the years to be able to assemble this and there are several suitors, though it is largely sold already. We spent most of our time talking with friends and looking around the floor.

There was not much in the auction from neither a Confederate paper money viewpoint nor a Federal Civil War era large type viewpoint, at least anything that I needed. We did not attend, but rather, chose to do dinner with the SPMC crowd including President Mark Anderson and several others. A meeting of several board members followed. However, there were a few notes of interest in the auction. One of the most significant lots in the sale was a Camp Lilly T40 note, a rare bird indeed, which I added to my 7.3% interest bearing $100 note collection. Another significant note was a T-39 serial number one which set a record at something north of $6,000 with the juice – serial 1 notes have leapt in value lately. A faked T-70 serial 1 went to the book and hopefully the winner got his / her money back. Most of the auction was 1864 material in slabs going for too high of prices for me.  A T-66 in PCGS New 68 PPQ went for $4600!!  This was a spectacular blood red note and great margins, but not centered the way I’d expect a New 67 or 68 to be.  To me it seemed like a great New 65 or 66 maybe.

Friday opened with the Society of Paper Money Collector’s breakfast, a fun event more should consider attending.  As it was, we got something approaching 80 +/- people with good times for all. The SPMC awards were passed out here.  I was honored with the Forest Daniel Award for ongoing literary excellence – I was completely surprised, but very appreciative. See the SPMC web site for the complete list (http://www.spmc.org/awards?year%5Bvalue%5D%5Byear%5D=2012). We congratulate all of the winners, especially Tom Denly for winning the Nathan Gold Award for lifetime service to SPMC.

At the table, we had set up Fred Reed and my new book, History of Collecting Confederate States of America Paper Money- 1865-1945, as promised in the pre-show announcement here. We only had one case – 20 books – and they were gone in 90 minutes from the start of the show. We took orders and sold most of three cases more, selling well over 150 books to collectors and friends in the first week ourselves including pre-orders from the previous month. Most of the rest of the print run has been distributed and I have relatively few cases left to personally sell.

Friday afternoon found me along with several other authors and interested parties at the SPMC author’s forum. Unfortunately this is held far from the bourse during a peak period and few attend – hopefully we will change venue next year to make it easier to attend. I’ve attended all of them over the past 7 years or so, missing 2 hours of the bourse, but find it worth it as these are very educational meetings. Fred and I were on the agenda first and I led the discussion taking the audience through what was in the book, History of Collecting Confederate States of America Paper Money – 1865-1945, and our findings. A lot of discussion ensued and I had to cut it short to allow for Carlson Chambliss to take the stage to discuss MPCs.  He did an illustrated in color catalogue on these and took us through it.

Following Carlson was Dr. Stephen Feller who was been doing research into the historical price trends of Montgomery notes with data from nearly 150 years of auction results. He presented his methodology and results showing that Montgomery notes appreciated modestly when adjusted for inflation from 1865 to 1950, but then took off yielding something like 9-10% compounded annually through 2011. It was fascinating and I found his approach thorough, though adjusting for grade differences and evolution is tough and not precise. I did agree with his general conclusions that Montgomery notes were a good investment over the last 60 years.  What would be an interesting next step is to look at results in 10 and 20 year increments – as this is more in line with most collectors’ time horizons, though I know some who’ve been at it 60 years. As a curiosity point, I checked T-68 with a couple of data points as a quick and dirty comparison and found it was even stronger if you bought them right.  In 1885 at the Barrett sale, a lot of 88 1864 $10 T-68s went for $0.02 in Fine to Unc which today would be worth an average of $30 each. Barratt’s Montgomery $1000 T-1 in high grade went for $10.70 and would likely bring $60,000 to $100,000 + /- today depending on how “Uncirculated” the note was. In the 1880s, $10.70 might buy about 50,000 T-68s which actually would have been possible in some circumstances then as hoards of the worthless 1864 notes were around. Today those T-68s would be worth about $1.5 million – probably one of the greatest returns on any investment anywhere if someone could have lived the 180 +/- years to do it.

Wendell Wolka followed with his research into other Confederate notes that may have been in process of being developed and perhaps even printed by the New York-based National Bank Note Co. and American Bank Note Company. These additional type notes would be beyond the well known Montgomery notes, Type 1 through Type 4. However as War broke out in April, NY printer operations in support of the Confederacy ceased, and Confederate Secretary of the Treasury Memminger sought alternative suppliers in New Orleans and Richmond. Wendell did not have a lot of time to present at the Author’s forum but was on the agenda later at 3pm. Unfortunately, I could not attend his presentation as I had to attend to business at the table which had become brisk. I look forward to hearing more about this research.

We had a great show Friday. We sold several mid range type notes, a smattering of Southern State and obsolete notes, some lesser type and variety notes, and two major extremely rare varieties, T-9 PF-8 and T-28 PF-11. We also had a steady stream of Confederate deals come to the table of which we were strong buyers.

Saturday morning found me attending the SPMC board meeting which is always productive as we advance the Society’s business.  Many things were discussed, but I must point out two:

The meeting ended at 10AM and it was a race for the bourse floor for me as I had several people who had new variety discoveries, condition census additions and even some rare type to show me. These will be added to the next edition of the standard Confederate money catalogue, Collecting Confederate Paper Money to be published relatively soon. I also had several buying and selling deals to close that day.

I also had promoted the show to the large cent community and several Early American Coppers collectors attended the show. These are some of my favorite numismatic items. I sold a range of common and better large cents to supplement the paper money business.  In a few cases, some of the collectors were interested in both!

Sunday found us packing up the exhibit while closing out business with a couple of dealers and collectors. Unlike in recent years when we drove and had lots of time to socialize, we had a mid-afternoon flight back to Boston and had to scurry to get to the airport. We had a great show and a great time at Memphis and I want to commend Doug Davis and Lyn Knight and all of the others for a great, well run show.  Hope to see you soon at a show (such as ANA in Philly or Blue Ridge in Dalton, GA) or next year at Memphis! 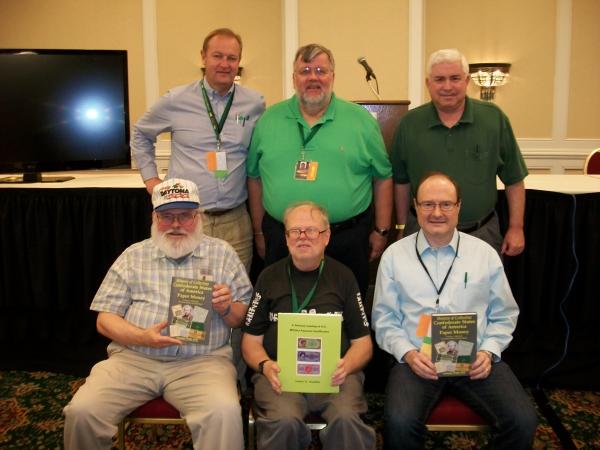