A Green Thread in Fractional Currency

A Green Thread in Fractional Currency

Fractional currency has many “green” threads in the series. Green ink was used to print the backs of the later issues from the third issue to the end of fractional, the fifth issue. Green was the color of the ten-cent second issue notes. Fractional even had a recycling “green” time when the BEP used captured CSA watermark paper to print fractional currency specimens. However, a much smaller but interesting “Green” thread stems from none of those but from the Green family, Hetty Green, to be exact. I recently read two books on her, Hetty; The Genius and Madness of America’s First Female Tycoon by Charles Slack and The Richest Woman in America: Hetty Green in the Gilded Age by Janet Wallach. Both of these books are wonderful reads on the maligned “Witch of Wall-Street” and show what she was, frugal to say the least, but a very determined lady in a vicious male dominated business. She was kind and generous to her friends and to charitable organizations, but unrelenting and strong in her field and NEVER one who you wanted to do wrong or make an enemy of. The thread in this blog is a minor one and involves Hetty’s relationship with John J. Cisco. Cisco was the Assistant Treasurer of the United States in New York who signed the two known Postage Currency Purchase Permits of 1862. These permits allowed the holder to buy $30 worth of Postage Currency every Monday and Thursday “until further notice.”  Hetty had known Cisco for years as he had been in the banking business a long time and served Hetty’s father as his banker. Cisco started a bank, John J. Cisco & son at 59 Wall St. with his son John A. Cisco in March, 1867.  Hetty’s husband, Edward began using the bank and then so did Hetty. She liked Cisco’s conservative nature and they gave her a desk and space to manage her securities, clip coupons, etc.  Both books record the time that John J. watched as Hetty stepped off a public transportation coach and entered the bank with a large parcel that was found to have over $200,000 in negotiable bonds in it. He reportedly told Hetty “Don’t you think it was risky to have brought these bonds downtown on a public stage? You should have taken a carriage.” To which Hetty replied “Perhaps you can afford to ride in a carriage. I cannot.” Such was the frugalness of Hetty. In March, 1884, John J. passed away and the bank was run by his son John A. and Frederick W. Foote. They were less cautious and conservative than John J. and made bad investments and business deals and on January 15, 1885, the bank failed. At that time, Hetty, now the richest woman in America, had $558,851 deposited in the bank, accounting for over 25% of the total deposits of the bank. She also had over $25 million in securities in the bank vaults. Unfortunately for Hetty, her husband owed the bank over $702,000 when it failed so the bank would not release her money but used it to cover his debts. The bank and people associated with it took to the papers to vilify Hetty and stated that if she had used her assets to cover Edwards’s debts, the bank would not have failed. She was not allowed to get her securities from the vault and had to cover Edwards’s debts before they would be relinquished. She wrote a check for $422,143.42 and relinquished half her deposit of $280,015.62 for a total payment of $702,159.04. She immediately retrieved her securities and had them transported for deposit at the Chemical National Bank in a private carriage. Interestingly, it was reported that the street was mushy from the snow and the lone horse could not pull the carriage so another had to be used to transport half. Not content to let this heinous attack as she felt it was, go, she sued the parties she felt had wronged her. At the trial, she stepped in front of her lawyers and began questioning the defendants and took a line of questioning so intense it brought objections to be voiced, not from the defendant’s lawyers, but from her own!  The judge ultimately ruled against Hetty and she was required to pay court costs of over $10,000, a princely sum in those days, but an expense Hetty felt was well spent.

So, the Green thread of Hetty to fractional is indeed only a minute thread, but the reading is exceptional.  I would encourage all to get those two aforementioned books and learn more about Hetty Green, the not-so Witch of Wall Street and her numismatically important son, Colonel E.H.R. Green. 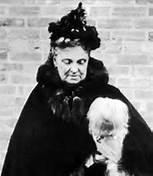