In the mid 1800’s, the majority of transactions between the general public and merchants were in sums of less than one dollar, making small change necessary. Prices of things were much less than what they are today. A quarter represented a good deal of money at the time. Three cents could buy you a newspaper or a ride. Five cents would get you a glass of beer and lunch. The shots at Fort Sumter that launched the Civil War didn't ring out until April 12, 1861, but even before the Civil War began, people worried about the stability of the currency and began hoarding gold and then silver. Later, they even began hoarding copper coins. It reached fever pitch after Dec. 28, 1861, when New York banks suspended specie payments in response to the issuance of federal paper money which was not redeemable in coin. By the summer of 1862, precious-metal coins all but disappeared from circulation and the need for small coins to make change became acute.  Not being able to get your change back was simply intolerable. Private attempts to remedy the small change shortage were ingenious but proved futile. Municipal, corporate and private scrip could not completely replace the withdrawn subsidiary silver coinage on a nationwide scale and local expedients such as John Gault's encased postage were little more than temporary measures. So the public turned to the only other medium that hadn’t developed a shortage yet. They started to use postage stamps for small change. Francis Elias Spinner, Treasurer of the United States, pasted stamps of the day on cards and thereby made the prototype of postage currency. He convinced Congress of the necessity for a federal, fractional currency and proposed that the United States issue these small notes in values less than $1 and in sufficient quantities to meet the demand for small change. Congress and President Lincoln responded with the Act of July 17, 1862, which monetized the postage and other stamps of the United States and prohibited private scrip.  This led to the printing of Postage Currency that bore facsimiles of the then current 5 and 10 cent postage stamps. Postage Currency was never legal tender but could be exchanged for United States Notes in $5 lots and was receivable in payment of all dues to the United States, up to $5. According to John J. Knox, Comptroller of the Treasury, in his 1888 book, “United States Notes,” the very first notes were printed in non-perforated sheets and were sent to the Army Paymasters for use in paying troops.  The sheets had to be cut apart by hand and this proved onerous, so the first sheets provided to the public were perforated like stamps. These were sold to banks and the public in sheets and you could tear off the notes needed with ease. The perforating machine could not keep up with the heavy demand so the banknote company started producing plain sheets that were cut with scissors.

Act of July 17, 1862--An Act to authorize Payments in Stamps, and to prohibit Circulation of Notes of less Denomination than One Dollar.

SEC. 2. And be it further enacted, That from and after the first day of August, eighteen hundred and sixty-two, no private corporation, banking association, firm, or individual shall make, issue, circulate, or pay any note, check, memorandum, token, or other obligation, for a less sum than one dollar, intended to circulate as money or to be received or used in lieu of lawful money of the United States; and every person so offending shall, on conviction thereof in any district or circuit court of the United States, be punished by fine not exceeding five hundred dollars, or by imprisonment not exceeding six months, or by both, at the option of the court.

So a BIG Happy Birthday to Postage & Fractional Currency!! 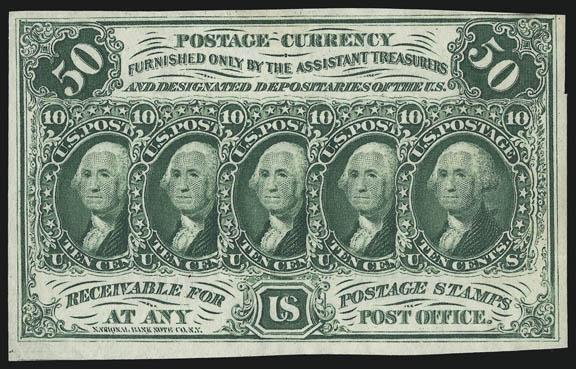