Brown Backs are among the more difficult types to be found as replacement notes.  Here is why.  Recall that #1 notes by far constitute the largest percentage of surviving replacement notes.  They were the most apt to be misprinted or damaged, and needed to be replaced before shipping to their destination banks.  While #1 Brown Backs are plentiful from the pre-1902 era, very few exist from 1903 to 1908, when they were discontinued.  Any new banks that formed after 1902 (which would require notes starting with #1) would be of the third charter style, namely Red Seals.  The only ways a bank could obtain a #1 Brown Back printed after 1902 would be if it was chartered before 1902, but then after 1902 either 1) ordered a denomination that was not previously among its inventory of currency, or 2) had a change of title or location.  Very few banks experienced these situations.  Consequently, most of the known replacements known of this type were made to replace generic regular production notes.  Here are the statistics for 1882 Brown Back replacements:

Brown Backs are the most easily misdiagnosed as replacements, because all of them printed from 1882 to late 1903 bear some version of the old style serial number fonts.  The key is to look at the Treasury Serial Number to confirm that it was printed after the general conversion to the new style fonts.  It is critical that you check the cutoff serial numbers in the Hewitt-Huntoon article to make this determination.  I will reprint the table at the end of this series of blogs.

Note that when searching through quantities of Brown Backs that there is a simple screening test to eliminate notes printed before the era of interest.  Notes printed after 1902 have a geographical letter, which were first applied to Brown Backs when the first third charter notes were printed.  If a Brown Back does not have a geographical letter, it was printed before 1902, and therefore our research does not apply.  That being said, it is possible that any given early Brown Back is a replacement, but we don't yet know how to identify them. 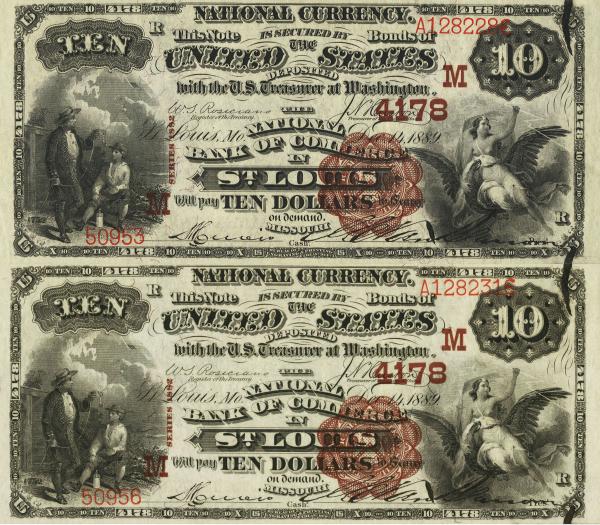