The world of large size replacement nationals is somewhat inverted.  Rare is common, and common is rare.  For instance, Red Seals are highly prized among collectors of nationals because they are considerably scarcer than their Blue Seal counterparts.  Not so with LSRNs.  Of the 80 replacements documented from the relevant time period, half are Red Seals.  Why?  Because #1 notes were the most commonly damaged and needed to be replaced, and a good percentage of Red Seals that survive were saved as #1 souvenirs.  Over 60% of all the documented replacements are #1 notes, which is skewed by the proportion for Red Seals, coming in at 75%.  Here is the summary data for Red Seals:

I wanted to back up for a moment and talk about why the BEP changed the font style in the first place.  Peter did inquire with the Smithsonian and asked specifically for records relating to a change in overprinting equipment at the BEP in 1903.  While no smoking gun was found, the annual report from that year explained that much of the complex had converted to electrical power.  I suspect the new fonts were used on new, electrically powered overprinting presses, marking the conversion from manual presses.  It makes sense for the BEP to have kept around old hand powered presses that had to be set up manually to print a single make up sheet every once in a while.  Perhaps in the future more substantial evidence will come to light.

One final word about diagnosing Red Seal replacements.  Remember that the earliest Red Seals have the old style fonts.  Our research applies to notes printed after the general conversion to new style fonts in late 1903.  Refer to the table in the diagnostics section of the article to check the serial number changeovers for Red Seals.

In my next blog I will cover the story with 1882 Brown Backs.  Please post your replacements in LSRN forum area.  Thanks! 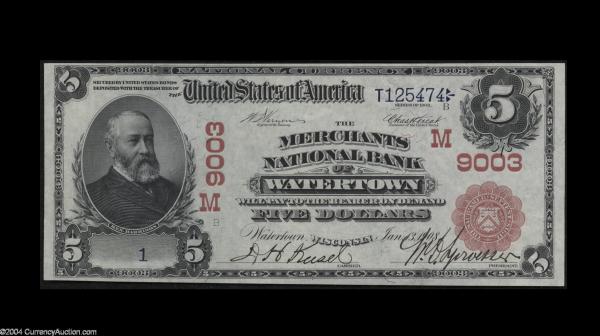