For a certain, and probably male, adolescent coming of age in mid-twentieth century United States, following the antics of MAD Magazine was a regular literary indulgence. Any teenager with the least hint of rebelliousness towards authority relied upon MAD’s zany humor and irreverent satire, symbolized by the stupefied figurehead of Alfred E. Neuman, as a guide through a world that often made no sense.

William Maxell Gaines (1922-1992) founded MAD in 1952 first as a comic within the stable of E.C. Comics, and shortly thereafter as a stand-alone magazine. For the cultural standards and inhibitions of the time, MAD Magazine was an anarchic breath of fresh air. Moreover, the legal backlash against MAD’s frequent satirical takes on popular culture were also important for establishing the definitional boundaries and defense of parody in modern American law. From an adult’s retrospective, much of its humor now seems puerile and mildly sexist, but at the time each issue had a madcap intensity to it that suggested a printed equivalent of a Marx Brothers’ movie. 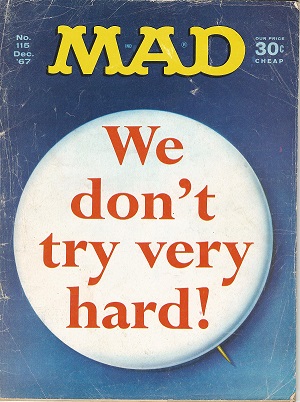 Gaines and his stable of writers and illustrators had not only created a splash in American popular culture, but also ruffled official feathers besides. Gaines had already piqued the F.B.I. by running an article on fictitious board games, describing one called “Draft Dodger” that invited readers to write to Director J. Edgar Hoover for their “draft dodger card”. The resulting volume of mail to that agency promoted a courtesy call to the magazine’s offices by two federal agents.  In MAD’s issue from December 1967 (No. 115), p. 18, Bob Clarke and William Garvin teamed together to produce a tweak of coin collecting entitled “Mad Mintlies”. Along with some mild numismatic groaners about various coin denominations, the page concluded with the depiction of a parody three dollar bill with a vignette featuring the leering imbecility of a bewigged Alfred E. Neuman as some Founding Father. 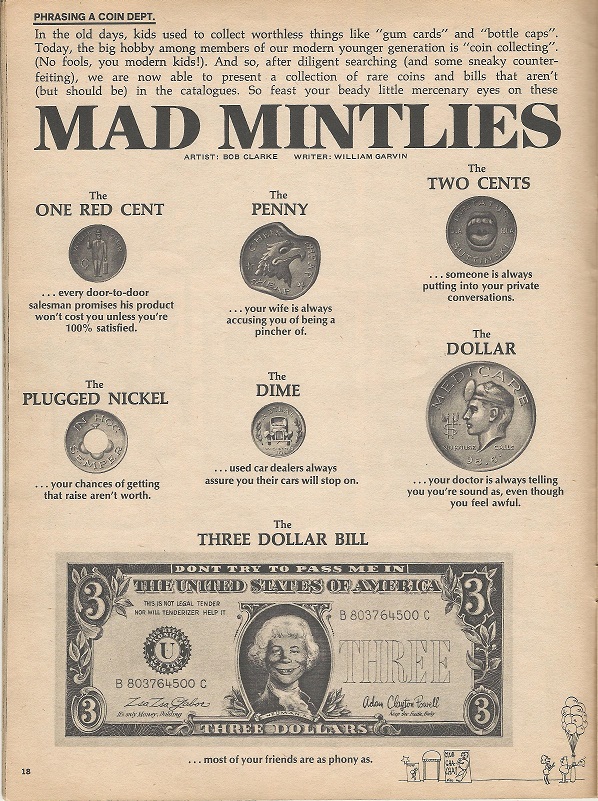 While no-one could have confused that fantasy note for anything real, according to Gaines’s biographer Frank Jacobs, enterprising readers cut the notes out of their magazines and managed to use them in Las Vegas money-changing machines, triggering yet another visit to MAD’s offices by federal authorities seeking to stamp out this particular counterfeit. Despite sporting a portrait and denomination unrelated to any circulating American currency (and being uniface to boot), MAD Magazine’s three-dollar note was apparently similar enough in sheer size to the real thing that it fooled the rudimentary technology used by money machines of that era.

Although there is little to no contemporaneous confirmation of this episode in newspaper accounts, it remained the case that the Secret Service was, to use the vernacular of the time, “uptight” about any representations of U.S. currency, no matter how unlikely they were to fool the unwary. Unlike our present era, when satirical versions of currency, political or otherwise, are routinely permitted, back in the day the Secret Service took a much harder line towards imitations. Whether it was the comedian Dick Gregory’s “One Vote” note of 1968 (see Paper Money, May/June 2015), or Richard Nixon’s “Frozen Dollar” of 1971 (See Paper Money, Sept./Oct. 2012), the Secret Service took a dim view of any competition, no matter how improbable, and enforced this view with the long arm of the law. And while the term “three-dollar bill” had long been a synonym in American English for phoniness and insincerity, even professional numismatists found themselves obliged to defend the honor of that denomination as an historical reality. 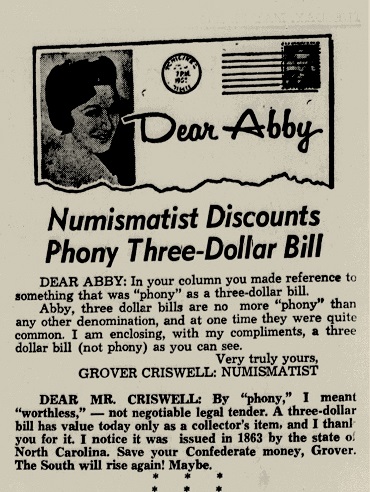 Grover Criswell sets the record straight in newspapers around the country, May 14, 1970.

Undeterred by its brush with the law, later the next decade MAD Magazine came out with a board game parody of “Monopoly” that featured a $1, 329, 063.00 denomination bill. It also later produced another version of the three-dollar bill, styled as “twe dollars”, safely smaller than official U.S. currency, that were given out as novelties at trade shows and conventions.

Peaking in circulation at over two million in the mid-1970s, MAD Magazine’s readership thereafter entered a steady decline, a victim perhaps of its own success as its satiric formula was taken up by edgier alternatives like National Lampoon. Yet even today, it is hard to appreciate the success of online parody sites like The Onion without recognizing the pathbreaking comedic achievement that the crazed countenance of Alfred E. Neuman represents.

Wonderfully on-target at times and still being published.......