Flandreau (pronounced "Flan-droo"), South Dakota is a small city on the eastern edge of the state, about fifty miles north of Sioux Falls, the state’s largest metropolitan area. First settled in 1857 and organized in 1879, Flandreau was later made the seat of Moody County. At the beginning of the 20th century, with a population a bit over twelve hundred souls, the city sustained three financial institutions: two state banks and one national bank. Established in 1881, the Moody County Bank was the oldest of the three (although in 1887 it had managed to take over an even older institution, the Bank of Flandreau). The Flandreau State Bank came along in 1891. Ten years later brought the First National Bank of Flandreau (Charter 5854). This last institution acquired a small footnote in American banking history for having been robbed by Pretty Boy Floyd and his gang in 1932.

At the century’s turn, the Flandreau State Bank was making available to its customers certificates of deposit, like the one pictured above, featuring the vignette of an attractive, bright-eyed girl, labeled simply “Minnie”. Clearly, Minnie was neither an allegorical figure, nor a conventional historical personage of the sort that security printers sometimes favored on their financial products. But what apple of whose eye did Minnie represent?

The obvious way of answering this question would be to look at the families of the bank’s officers. Flandreau State Bank was founded in 1891 by Dr. George A. Pettigrew, who served as its first President. Originally from Vermont, Pettigrew had moved to South Dakota and set up his practice in Flandreau in 1883. Quick to diversify his activities, Pettigrew also served as a government surgeon for the adjacent Indian reservation as well as surgeon-general for the state of South Dakota. He was also prominent in Masonic leadership. Yet Pettigrew, who married another Vermonter and brought her back to Flandreau, had only one daughter, and her name was Addie.

In 1903 Pettigrew severed his connection with the Flandreau State Bank and moved south to Sioux Falls. His successor as President, George H. Few, was primarily active as a merchant, and later postmaster, of Flandreau. Few, however, had three sons and no daughters at all.

Finally, it is to the family of the Cashier of the Flandreau State Bank that we must turn to discover the identity of “Minnie”. Albert G. Faegre occupied that position from its founding in 1891. Unlike their Presidents, who might be merely investors or financial dilettantes, at that time banks' Cashiers tended to be full-time professionals. Prior to his employ with the Flandreau bank, Faegre had been Treasurer of Moody County. Unlike Pettigrew and Few, who were both transplants from the East, Faegre hailed from Iowa, the son of Norwegian immigrants.

“Minnie” turns out to have been Minnie Lorraine (possibly Lorena) Faegre, born to Albert and Sara J. Faegre in 1886, the second of four children and the only girl in the family. Minnie had an older brother, Rueben Oliver Faegre (born 1883), and two younger brothers, John Barthell Faegre (1887) and Albert Leonard Faegre (1889). 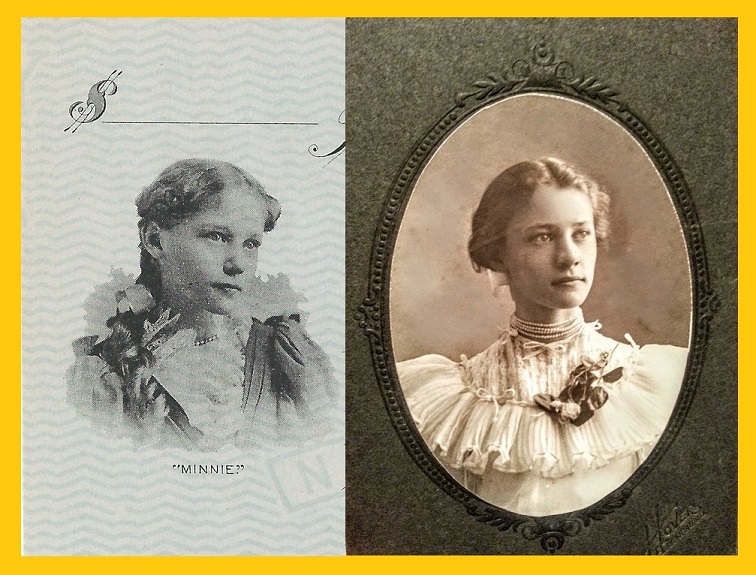 Minnie blossomed into a young woman of ethereal beauty. A precocious student, she graduated at age 15 from Flandreau High School. Too young yet for college, she attended the Lutheran Ladies’ Seminary in Red Wing, Minnesota for two years. Of that episode, she would recall some seventy years later, “they sent me to a finishing school where they taught dumb things like cooking and sewing.”  Nonetheless, she managed to complete the “classical course” at that institution in 1903.

Early next year, tragedy struck when Albert Faegre died unexpectedly in February 1904 at age 47, after undergoing an emergency appendectomy in La Crosse, Wisconsin. Not only did his death upend his family, but it also scrambled the plans of some area financiers. Faegre, who had been the Flandreau State Bank’s Cashier since its founding, headed a group of investors that in 1903 had sought to establish a national bank in nearby Egan, South Dakota, a smaller town just southwest of Flandreau. Faegre’s partners included George H. Few, the former Vice President of the Flandreau State Bank who replaced Pettigrew as President after the latter resigned in July 1903; John P. Tenold, the new Vice President; and H. R. Hasvold.

As it happened, Egan was a place in need of a bank. In November of that same year, the town had suffered a blow when the Cashier of the Egan State Bank, G. L. Struble, vanished under suspicious circumstances, only to be taken in custody by the authorities the following January. By that time losses revealed on the bank’s books caused it to be taken over by the state and placed in receivership.

Just as the Egan State Bank was closing its doors, another sprang up in its place, the First State Bank of Egan. The Cashier of this new bank was Alfred B. (A.B.) Larson. Larson, an ambitious young man, had been serving as Assistant Cashier over at the First National Bank of Flandreau, resigning from that post in December 1903 to take the reins as Cashier at the new state-chartered institution. I.C. Taylor was the bank’s President. In January 1904 the new bank purchased, at auction, the premises of the old, failed bank. Yet Larson’s new position, and the bank itself, existed only for a few short months. In April 1904 Larson, along with George Rice, Charles F. Jenks, Jay Manson, and I.C. Taylor applied to open their own First National Bank of Egan. This new bank represented a conversion of the First State Bank of Egan, which had only just been formed, to a national charter. When the new national bank (Charter 7252) opened in May, Larson was its Cashier, W. H. Pratt Jr. was its President, and T. E. Spaulding its Vice President. Then, that September Pratt sold out his interests to Larson and George Rice, the latter becoming the bank’s new President. Thereafter the First National Bank of Egan’s roster stabilized. Rice and Larson served in their respective positions for the next twenty years until Larson took Rice’s place in 1924, remaining there until the bank’s insolvency in 1932, the same depression year that the national bank in neighboring Flandreau also went under.

With Albert Faegre’s untimely passing, the original investors’ bid to charter a national bank in Egan collapsed. Instead, George Few and John Tenold remained in their positions as President and Vice President, respectively, of the Flandreau State Bank. The post of Cashier vacated by Faegre’s death was instead filled by Faegre’s own son, Rueben, the eldest of his four children. This undoubtedly shielded Faegre’s family from the economic blow that his death would have represented. In addition, Albert’s passing left his widow Sarah and his children (at that point all nearly adults) substantial stockholders in the bank, whose business was thriving during these years. After remarrying in 1910, Sarah relocated from Flandreau to the west coast. By the beginning of 1911, Sarah and the children sold out their interests, and the State Bank of Flandreau was absorbed by the First National Bank of Flandreau. Few and Tenold became shareholders in the acquiring bank. 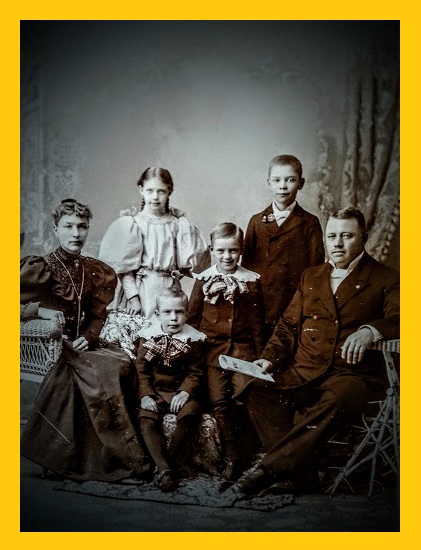 Sarah and Walter Faegre, with their children.

After leaving the Lutheran Ladies Seminary in 1903, Minnie Faegre attended the University of Minnesota, graduating in 1908. It was there that she met her husband, Walter Knox Kutnewsky, studying in the class ahead of her. Walter was the son of Dr. John Kutnewsky, a prominent physician who for many years ran the State School and Home for the Feeble Minded at Redfield, South Dakota. Minnie and Walter married at Flandreau in 1909 and lived in Aberdeen, South Dakota until the following year, when they moved to Yakima, Washington. There, Walter ran a newspaper and Minnie worked as a journalist. With the entry of the United States into the Great War, her husband’s military deployments took the couple first to New York City, where Minnie studied at the College of Physicians and Surgeons. Later, they relocated to Washington, D.C., where Walter was detailed to the U.S. Shipping Board. By 1924 the couple settled in Oakland, California, and lived in the Bay area for the rest of their lives. At some point in the early 1920s, Walter Kutnewsky changed and shortened his name to Walter Kincaid Knox, which Minnie duly adopted.

There is no evidence that Walter and Minnie Knox had children of their own. In addition to being active in the American Legion (which he had a hand in founding), Walter kept busy as a realtor and insurance broker. Minnie Faegre Knox was, in the parlance of the early to mid-20th century, a “clubwoman”: engaged with a variety of civic organizations of national and local orientation, most with a focus on the arts. These groups ranged from the Daughters of the American Revolution and the American Legion Auxiliary to the Oakland City Women’s Club, East Bay Drama Group, and the California Writers’ Club. Over the many years, she delivered numerous lectures over the radio, worked as a writer and translator, and hosted dramatic and poetry readings around the Bay Area. In 1927, she was a founding participant in the first Oakland Tribune Poet’s Dinner, which became an annual Bay Area event that she attended, without missing a beat, for more than fifty years. Age slowed her down, but not by very much As she said to an interviewer in 1973 about the extent of her activities, “I cannot remember everything. I never keep track of what I had done. I am always opening the next door.” And so she did, until her death in 1980 at age 94.

Above all and more than anything else, Minnie Faegre grew up to become a poet. Over the decades she published her verse in newspapers, magazines, journals, and anthologies. If her poetry was not necessarily of timeless quality, at her best she strove for and achieved a certain cerebral, epigrammatic precision in her work, as if her poems were well-wrought medallions like the portrait of her young self that once added charm to a routine financial documents of long ago.

Raised on the flat vistas of South Dakota, she meditated on that experience in one piece, “Far Horizons”, published in 1958:

Because my eyes first opened

With only shifting winds

to guide the eye,

I thought to find the ocean

With restfulness of unrestricted

And sense of life forever born

In moonset ebb and flow of

It was not so. The vast

Unlike the prairie scarred by

Was left untouched with never

Where it was furrowed by a

Memorial and Biographical Record. An Illustrated Compendium of Biography (Chicago: George A. Ogle and Co., 1898).