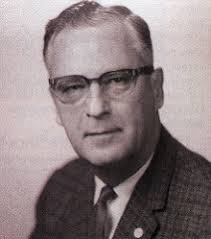 Matt is SPMC member #166. He served as on the SPMC board of governors from 1967-1969. He received two awards of merit and the Nathan Gold Award in 1964. He is best known for his efforts to have the motto "In God We Trust" put on our currency, a project he began in November 1953 and which he shephered through Congress until President Eisenhower signed it into law on July 11, 1955. He was an author and collector of obsolete banknotes and fractional currency. He wrote A Guide Book of United States Fractional Currency in 1963 and an SPMC published book Arkansas Obsolete Notes and Scrip in 1985. He was awarded many awards from the ANA and was elected to their Hall of Fame in 2006.